"A FOOTBALL FIELD OF LAND PER HOUR"

PREPARE FOR A MORE DEVASTATING KATRINA.

​Louisiana loses 75 square kilometers annually. Since 2000, 1,000,000 acres of wetland have been lost. An area the size of Rhode Island will be eroded off the coast of Louisiana by 2050. As wetlands and natural barrier islands erode, nearby communities will simply suffer the negative consequences.. For every one-mile of wetlands that we lose, we face an average annual increase of $5,752,816 in property damage. Not only will we lose money, but, more importantly, we will lose our main protection from natural disasters.

Natural barriers of protection, such as barrier islands and wetlands, are our best defense against natural disasters and storm surge flooding. As we lose our protection around our coast, we lose access to effective  flood-prevention methods. In the absence of an efficient flood-prevention method, a future severe natural disaster like Hurricane Katrina will face no resistance while tearing apart New Orleans and its communities.

Beginning in 2012, the Coastal Protection and Restoration Authority (CPRA) has implemented a Master Plan. Ever 5-6 years, they come out with a new one; and, as of right now, they are currently implementing the $50 billion 2017 Master Plan. Although this plan has helped tremendously, in its current state, it will not be able to overcome the significant wetland loss that is happening. Consequently, the CPRA has reached out to the general public for project proposals. If you have a great idea, check the Professionals tab to learn what to do next. If we cannot discover a viable solution, Louisiana's economy and communities could be at severe risk.

...AND THIS WATER OFTEN ENCROACHES...
Katrina, Gustav, Ike, and Isaac
Image Credit: Nasa.gov and Weather.gov
...TO DEVASTATING EFFECT.
COASTAL EROSION...
...IS DESTROYING ONE OF OUR BEST DEFENSES AGAINST STORMS...
"Wetlands and barrier islands provide protection from the strong winds and storm surges of hurricanes. It is estimated that every 2.7 miles of wetlands reduces a storm surge by one foot. As erosion continues, and wetlands turn to open water, their ability to decrease approaching storm surges decreases and the risk of catastrophic loss of life and property from hurricanes is greatly increased. Data from past hurricanes indicates that the loss of every one-mile strip of wetlands along the coast, results in an estimated $5,752,816 average annual increase in property damage." - southeastern.edu
AND IS THREATENING LOUISIANIAN HOMES, JOBS, AND LIVES.
WE WILL PAY THE PRICE. 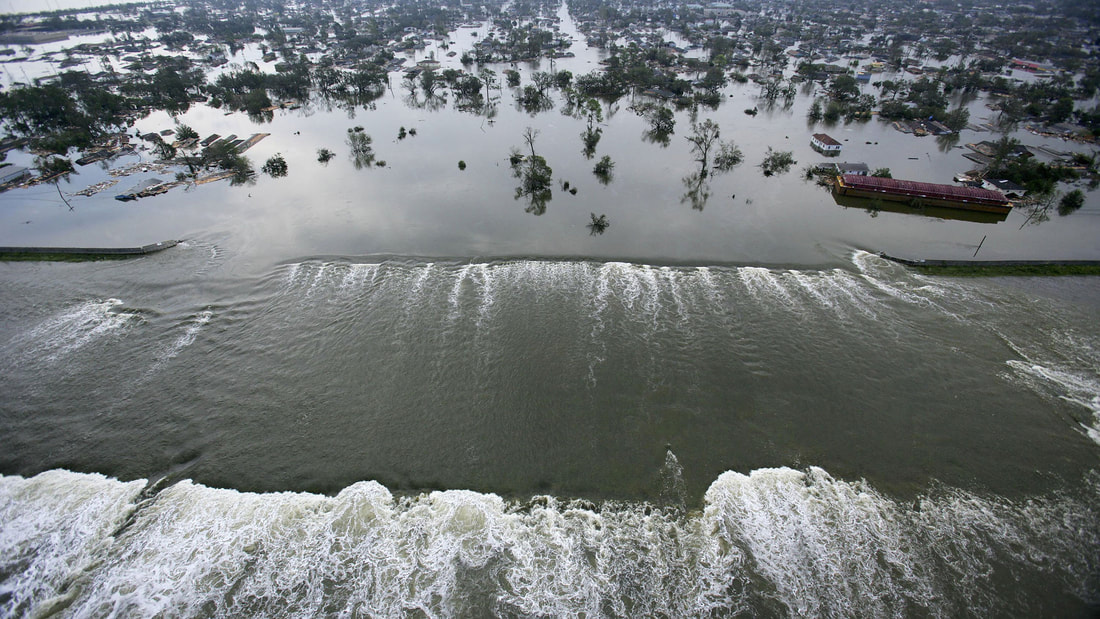